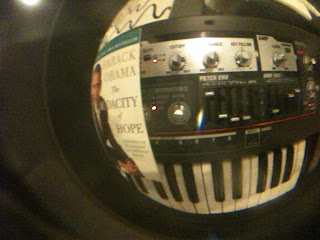 For a while now I've been chewing on the idea of living live… Let me explain. I don't necessarily mean something like "the truman show" although I do find that idea appealing with u-stream and all... I am one to leave my stream going on for days with music loops and stuff. What I mean is more like living in the moment…trying not to edit my mistakes, feelings and reactions all the time… I am an audio editor so this is very hard to fathom because I know what difference editing can make… I am able to make someone sound impeccable… I can make people say things they were never able to utter properly in a recording session… through editing… I actually edited a Bush/Kerry debate for an animated website once and by the end I was almost liking what Bush was saying because I made him sound so good by taking the stumbles and mispronunciations out… I couldn't fix "nucular" though (sigh) but that's a whole another story.

I keep a copy of Obama's "Audacity of Hope" on my night stand that I've been trying to read through for years now. Tonight, fueled by insomnia I picked it up again. I'm up to page 128 where he talks about the humiliation of loss… early political loss in his career specifically… and he mentions the fear and anxiety that accompany this kind of public exposure as "the kinds of feelings that most adults wisely organize their lives to avoid".
Is that wise though? I wonder.

Last week I went out for lunch with a friend who works in the same area of town where I've been working now for about a month. My friend asked me if it was okay to bring some coworkers to lunch; of course I said yes. To my surprise and temporary panic, one of his coworkers has a serious stutter issue (I don't mean this as mockery... I am myself sort of dyslexic plus I'm sort of a DJ too so stutter and audio loops are awesome... so back off!) hmm...maybe I shouldn't be mentioning this but hey, there you go, I'm not editing myself... and the reason that I mention it is because this guy, right then and there, taught me a great lesson about living... living live for that matter. Unable to edit himself, he was the most talkative of us all and a great guy with whom I have a lot in common, I found out.

Aren't we missing out on life by mentally editing ourselves all the time? I'm gonna try to put my stuff out there more often 'cause those who mind don't matter and those who matter don't mind.

Posted by Unknown at 3:08 AM No comments: